The Gallery will not be open this weekend, First Friday and Saturday of April.  If anyone was planning to stop in, I would be happy to set up a time to meet you there.  Larry and Lesa, the gallery owners are not available but will be back in action in May.
Posted by Wendy Willis at 10:02 PM No comments: 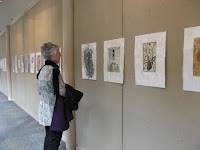 U of the Arts
We started out at the University of the Arts.  We first saw the exhibition "Social Remarques" with ASU's John Rissieuw's piece made from the clothing of landmine victims.  There were also 5 print portfolios/exchanges on view which were very exciting to see.  We love to examine them, trying to figure "how did they do that!"  From UArts we went to the Penn. Academy of Fine Arts for the rest of the day. 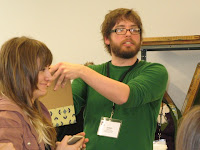 PAFA
We attended 3 demos:  Viscosity  Color Printing = C-; Spooning Large Format Woodcuts = B and The Drum Leaf (book binding) = A.  Joseph Lappie was an infectious presenter who had the large crowd quite attentive to his process.  We saw our first exhibition which was part of Philagrafika with some VERY interesting works like Orit Hofshi's woodcuts.  The wood used were ordinary planks and after being carved and printed were hung as part of the piece, along with the prints.   We also enjoyed 6 more print exchanges and a wonderful show of prints from the C.R. Ettiger Studio which included a print from our friend, Janet Towbin.  We ran into Dan Welden in the halls but didn't really see any other people we knew.  Too busy looking at the prints to check out other people's name tags. 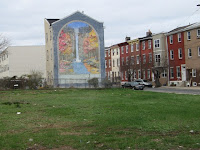 This morning we started with the Vendor's Fair, our second favorite part of the SGC Conference (open portfolio tomorrow is our favorite).  We managed to find a few treasures like a wheat paste shaker, a funny tube of rice paste and some drypoint tools from EC Lyons.  We attended then, the presentation by Judy Pfaff whose work was fascinating.  She is a favorite of Marlys' and I can see why.  She definitely works "outside the lines".  After the lecture we headed to the curb to catch a shuttle to Temple University's Tyler School of Art.  We passed an amiable 30 minute wait at the curb with John Rissieuw and Joe Segura.  On the bus ride, I again noticed how many murals abound in the Philadelphia area. 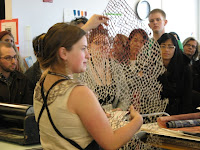 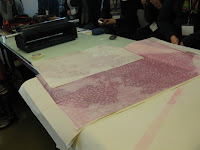 What a wonderful place Tyler is.  Great spaces, lots of room, great accoutrement.  Lucky students.  We found another great Philagrafika site here with a video showing Thomas Kilpper creating a huge linoleum cut on the floor of an old East German building with 90 images documenting the history of surveillance in East Germany from the Nazis to the present time.  He narrated the piece and said it took over 24 hours to carve one figure.  My arms ached just watching it.  Then we attended another demo, this time with Monika Meler, who showed us an alternative approach to relief printing.  She rolled out ink on mat board and placed a stencil cut in matboard under the inked board and then put a Japanese paper down on the inked mat board and ran it thru the press.  Et voila!  A soft edged transfer, which she repeats and repeats up to 30 times.  Phew!  We only got to see 2 layers.  Here is a photo of the two layers and a ghost.  Definitely an "A" demo!  Afterwards we cruised through the Rochelle Toner exhibition before shuttling back to our hotel.
Posted by Wendy Willis at 8:21 PM 4 comments:

Today was a glorious, sunny day.  Perfect for a double decker bus tour of the city.  We got the lay of the land, ate a Philly Cheesesteak and dropped by the Print Center for the Drive By Press event.  All in all a very good day.  It was especially nice to see ex-Philly artist, Janet Towbin, in her big city element!  We started the day collecting our registration materials and ran into Mary Hood from ASU who will have a guest printmaker from Copenhagen, printing in Tempe next week.  Funny to come all the way to Philadelphia to meet another AZ printmaker.
Posted by Wendy Willis at 7:14 PM No comments: 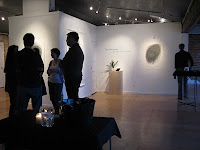 Janet Towbin's exhibition opened at Modified last night.  I haven't been there since they remodeled.  It's a really nice space now.  Janet's amazing drawings from her "Meditations on a Black Stone" series create their own space in which you can linger.   Delicate and powerful.  Mesmerizing.

Collaborations
Enjoyed the free Thursday night entry to SMoCA's exhibition of the Chuck Close prints.  What a remarkable technician he is; a planner extraordinaire.   I loved seeing the linoleum from which he printed and the woodcuts with the multiple colors remaining, showing that he printed several colors in one pull.  I like to see the process almost as much as the result.
Posted by Wendy Willis at 12:39 AM No comments: 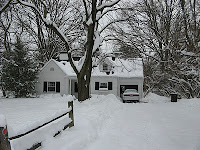 Marlys and I are flying to Philadelphia next Tuesday to attend the annual Southern Graphics Council conference. It will be 5 fun filled days all about printmaking. Sigh. If you are participating in the open portfolio, I hope to see your work. It is my favorite part of the conference. It will be wonderful to meet some of the printmakers I have only met online. Vicki LoSasso from Printmakers Conspiracy in Reno will be showing the "Naughty, Taboo, Just Plain Wrong" print exchange that I am in, during the Second Session.
I understand the weather will be in the high 50's which suits me just fine. I really hope Philly's winter days are gone. The freaky snow at my Dad's house in Cincinnati in February fulfilled all my snow longing.
Posted by Wendy Willis at 12:58 AM No comments:

END OF WORKSHOP DECOMPRESSION
Today was the last day of a 2 and 3 day/or 5 day solarplate workshop with Dan Welden. It was held at the Armstrong-Prior studio, organized by John Armstrong, Joan Prior and Marlys Kubicek. I was a volunteer studio assistant and travel arranger. The happy participants were blessed with small class size (7) and lots of personal attention. Dan was blessed with some very talented and fun artists who really took his instruction to heart and ran with it. 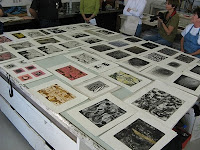 The work was amazing. Many of the participants focused on creating relief plates by working directly on the plates and then trying all kinds of different ways to print them, varying the color, orientation and number of pulls. Some used stencils, chine colle and of course transparencies to work their magic. There were some pretty happy smiles as the prints were revealed. The solarplate process is fairly easy to learn. But it can be as difficult and challenging as the most complex printmaking process in the variety of methodology and the desire of the artist to reach a defined result. Even Dan, who knows more about solarplates than any other person could, was frustrated after several failed attempts to achieve his desired result. But in this class, no one gave up. Those who encountered failures, quietly kept plugging away until they found a way. This is the environment Dan Welden brings to his workshops. A safe place to fail. Allowing the artist to learn even more from the failures than the successes. Plus you can't find a nicer man on the planet than Dan.

So here is the latest class portrait in his long list of worldwide workshops: 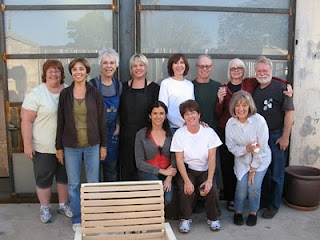 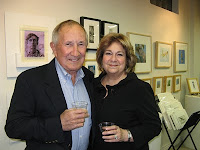 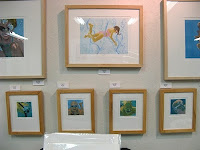 VISITING ARTIST OF THE MONTH:  DAN MOORE
The place was jumping Friday night.  Dan Moore's fans and followers came in to show the love for his wonderful photographs.  People came I haven't seen in years, happy surprises that just cheer you up.  I worked with Al Van Duyn on the Formula 1 Grand Prix in 1990; he was the promoter and I was with the City.  We had a great time back then.  So it was a highlight to see Al and Susie walk in the door.  They were sure surprised too to see me and learn that I gave up being a bureaucrat to become a printmaker.  I have put more photos up on my flickr page so check them out if you want to see who else came by.  http://www.flickr.com/photos/wswillisart/

WORKSHOP IN RENO - JUNE 19 & 20 2010
Earlier this year, I participated in a print exchange titled "Naughty, Taboo, Just Plain Wrong" put together by Candace Nicol, Vicki LoSasso and the Printmakers Conspiracy in Reno, NV.  I mean who could resist a title like that?  When I learned they were going to participate with the prints from NTJPW in an event called NadaDada Motel where artists take over rooms in some of the older motels downtown and turn them into mini art galleries, well, I just had to see it.  So my husband and I are planning a road trip to Reno in June.   Now they have invited me to come as a guest artist and do a two day Reduction Linocut workshop to which I have agreed.  I plan to get back in the studio and do some more linocuts after the past month or two of monotypes.  The event will be held at the Comstock Art Factory. 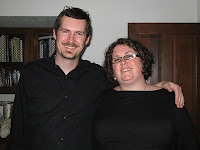 My stepkids came home to surprise their father for his birthday.  They live in the Bay Area and are bright and funny and so much fun to have around.  I just love them so much.  They leave tomorrow and the house will not be the same.  We just love to hear them laughing, which they do quite often.  We are so lucky, plus they love each other and get along so well.  We couldn't be prouder of them.
Posted by Wendy Willis at 12:43 AM 2 comments: