My solo exhibition "AT SEA" just opened yesterday and the hightlights of the show were my two newest reduction linocuts.  At the suggestion of my sister, after singing the praises of all the large format linocuts I saw the SGCI Conference in Las Vegas in April, I attempted two 24 x 18 inch 6 color reduction prints.  The largest I had done before were 4 11x15 prints, in 2006.  Those took me 6 months to do.
I have had a lot more experience since then  and so felt excited at the prospect of working large.  I worked from photos I took at an aquarium in Newport, KY, starting with a line drawing of the two images combined - 24 x 36. 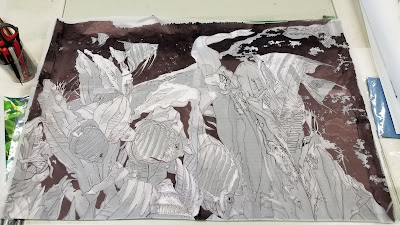 Overlaying the drawing with acetate, I then started to color in the images, trying to see how few colors I needed to depict the fish and kelp and depth I sought.  I selected color chips (the freebies from Home Depot) to target my color choices and prevent me from using ink right out of the can.  I used a combination of hoarded Daniel Smith and Gamblin relief inks. 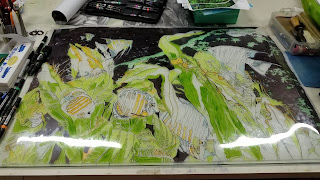 Then I transfered the drawing to the two 24 x 18 inch lino which I had adhered to masonite.  I used red carbon paper which I got from McClains and a black Stabilo marker to make it permanent. 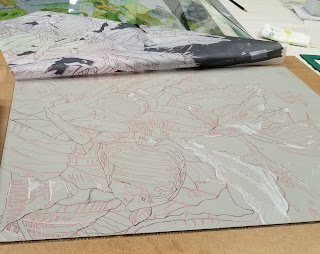 I weighed whether to start printing with the light blue or the yellow.  You can't get yellow over any other color, but the blue only appeared in the fish.  If I printed the whole plate in yellow and attempted to print light blue I would get green, so I cut stencils to block off everything but the fish and printed the blue first.  I printed 12 of each plate., using Ternes and Burton pin registrration
I printed the yellow next without a stencil but I cut a mask to protect the masonite from stray inking. 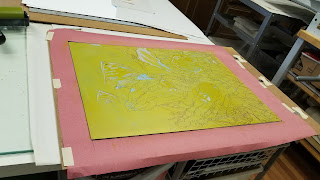 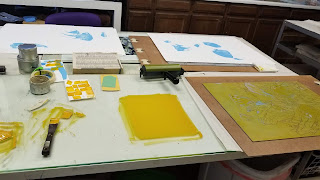 The benefit of printing the blue first and then the yellow was the free green I got on the fish.  And I got my bright yellow and pure blue where I needed them.

I normally determine exactly where each color would go in separate color separations.  But working this large made that problematic. And I must say, the Sherrie York process influenced me a tad on this project.  (See her blog Brush and Baren.)   Because I had drawn the entire line drawing on each plate at the beginning, I drew in the areas I wanted to save as yellow and then cut that away and printed color 3.

I was printing in my home studio and it has been monsoon season which means it is a bit more to a lot more humid depending on the day.  After I printed color 3, I ran into problems and had to reach out to Santo Press master printer Brent Bond for advice.  I turns out that the humidity had stretched my paper on this print with the large angelfish.  The upper right corner stretched a bit above the straight and narrow.

I didn't see it until I was in to printing the 4th color.  I had good luch with the second image but the first one was super stretching and it was raining outside.  I was using a tympan, the pressure was too tight and my registration was wonky - and I was using pins!  So I took Brent's advice and stopped that night and tried again the next day with less pressure and a single blanket and I was back in business. Phew! Because it was starting to look pretty darn good. 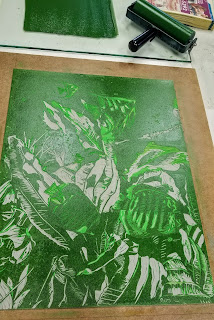 At this stage was I wearing myself out, so I enlisted the help of a fellow printmaker, Paulette Olive, to help me with the heavy lifting - actually lifting the plates on and off the press.  It was much faster and way more fun sharing the studio.  Each color took about 6 to 8 hours to print (25 in all).  After carving away color 4 and printing 5, I briefly considered ending there.  It looked so good.  But I wanted to bring in more depth so I continued on with color 6. 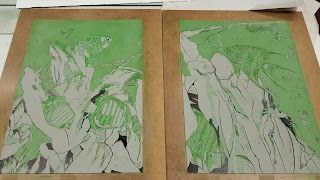 After color 6 I hand colored the orange around the eyes because I never could figure out how to do it earlier.  Et voila!


This is the exhibition view, pardon the light reflections at the top.  Final curating allowed an edition of 7.

I can't believe it has been over a year since I last posted.  But that year has passed and I am now ready to be more present in my art practice both on the creative side and the administrative side.  It's all about learning and keeping up.  New technology is getting harder for me as I get older but I am determined to learn as much as I can.

In the meantime I am furiously but happily making new artwork for my solo show at Five15 Arts@Chartreuse in September.  My most recently completed piece is called "Covet" which was primarily created for a print exchange of the same name organized by Melanie Yazzie of UC/Boulder from her printmaker encounters at the SGCI Conference in Las Vegas last March. 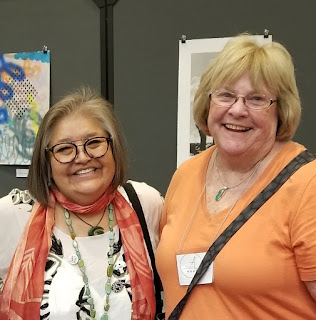 Before I started on my print, I saw that two printmaker heroines I respect (Kathryn Maxwell and Emily Arthur) had posted their prints in process and they had printed on both sides of the 20 x 8 paper size.  So I decided that I too would print on both sides.  Also at SGCI in Las Vegas, I connected with John Hitchcock at the Open Portfolio and he talked about using dye which added splashes of color in his screenprints.  So when I came home, I experimented with 3 different types of dye and used this new tool to create Side B of my print with a gomuban relief print of baby turtles.  I used pieces of embossed paper to create texture in the turtles shells after inking and before printing. 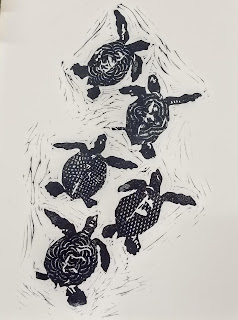 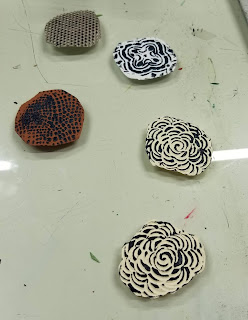 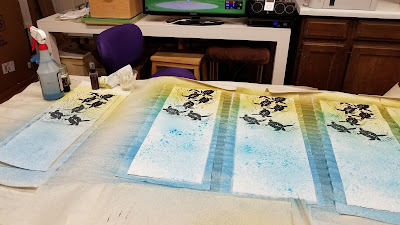 After printing the baby turtles, I sprayed two different colors of dye to represent the beach and water as they race to the ocean.  On the other side, I planned a 6 color reduction of a green sea turtle I met off Maui some years ago. 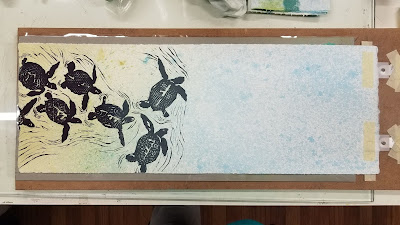 For the reduction print I used battleship grey linoleum mounted on masonite.  I used an acetate mask to isolate the turtle from the water for the first 4 colors.  For the last 2 colors I inked the water first and then cleaned and re-inked the eyes in black.

The prints are intended to be 10 x 8 inches in the end.  But before the fold this is how they ended up.

Thank you Melanie Yazzie for including me in your project.

Now, back to my studio for more new works already in process.

Posted by Wendy Willis at 11:46 AM No comments: