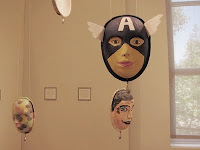 Having participated in the exhibition "Discrepancy:  living between war and peace" now showing at the Napa Valley Museum, and having done so much research on the people who fell from the World Trade Center, I feel very connected to all that is being done to mark the anniversary.  I just watched (on dvr) a special pre-game celebration of the 2001 Baseball World Series before tonight's Diamondbacks game with almost the entire team coming back to our ballpark.  Our old pitchers, Randy Johnson and Curt Schilling, threw out the first pitch.  It seems like the antithesis to all the pain and sadness, to remember how happy and surprised we were to win such an impossible feat at such an emotional time.

As good as those memories are, it is still so sad.  The sadness is staying with me because I learned recently that our soldiers who are fighting in Iraq and Afghanistan, don't understand how much the American people support and respect them.  My sister, Nancy Willis, who conceived and curated the exhibition, took a group of veterans from the Pathway Home program through the show where they could see how all the artists expressed their individual points of view about the events of that time.   Pathway Home is one of the rare places where soldiers coming home the war can go to get help with post traumatic stress.  One of the therapeutic art projects in the program is the creation of masks, where they paint what they feel people see of them on the outside and what they feel about themselves on the inside.  Some of the masks were hung in an installation as part of the Discrepancy exhibition.  There were quotes from the men on  the walls near where the masks were hung.  It was a very moving display.  Some of the veterans came anonymously to the opening, to see how their masks were viewed, how people reacted to them.   This is what Nancy later wrote about the private viewing she shared with the veterans from the program. 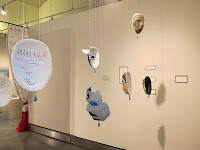 One of the most recurring comments from them was, they didn't think people actually cared. so this had a big impact on them. THat people would stop and read, and look. They felt seen and heard.  It is a BIG issue. Whether it is the mliitary environment, home, work or community, they are taught to tough it out and deal. not ask for help or show vulnerability.  They acknowledged that serves a soldier well for the job he is asked to do, but what about when they come back? For those with "invisible injuries"  like PTSD, they have little release, or tools to let go or expose their feelings. It is equated with weakness.

One of the vets said to me, "when I walked around the room and read the artists statement, I understood, that we are not so far apart. We feel the same way. " and that was BIG revelation for him. Others agreed.  They said, they were a little anxious about what they were going to find when they came in. They expected something more political or divisive because that is what they see everywhere else. 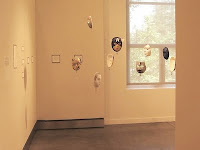 Before they left, I headed back to the masks to the one guy who had a mask in the show but hadn't said anything. I said, "what do you think?". he extended his hand, and said "Thank you, ma'am for doing this.  I really didn't think people cared.".   He said low morale is one of the leading causes of death when they are over there. I think they see the divisive left/right nature of the media as overall non support. As we walked out, he told me he had been in Iraq for 2 1/2 years. He told me the exact date of when he went in and when he got out, as if each day was counted and lasted an eternity. He said, he lost so many friends who were married with families.He said, " I only have my parents. they had wives and kids. it just isn't right.  I would trade my place today with any one of them if I could. ". I got a glimpse and only a glimpse of how it is different for each one of them. Collective injury, but specific personal trauma.
There is something so wrong with a country that asks the men and women who volunteer, to fight for our country but ignore their needs and the damage that they endure, when they come home.  We just aren't doing enough.   Here is a link to the Pathway Home website.
Posted by Wendy Willis at 3:01 AM 1 comment:

A Little Relief - The Opening 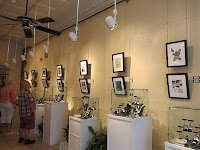 RECEPTION
Last night was the opening reception for the exhibition Marlys and I put together of all 6 x 8 inch reduction relief prints.  Wil McNabb Jewelry Studio changes out the art every month and puts on a nice little spread for First Friday's Artwalk.  Sue Alpern is responsible for the art at Wil's and has a great eye when it comes to hanging the shows.  Marlys and Sue laid it all out Thursday night and did the hanging Friday morning.  Diana Hartley, Marlys and I framed all 22 pieces earlier in the week and they looked great with uniform frames and sizes. 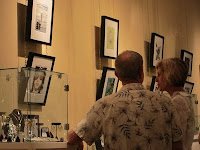 I have been teaching workshops in Nevada, California and Arizona and invited some of my "students" to submit prints for this show.  My students have ranged from the inexperienced to MFA's in printmaking.  I love how some people will learn a process and then just run with it.

And people responded to the work.  It is accessible and eyecatching.  They are all curious about how it is made and impressed when they learn how challenging it can be.  David Williams, the printmaking teacher at Northern Arizona University, was impressed.  He said he would send his students to see the show because they are covering this medium in one of his classes.

Here is a link to see more photos from the opening.

FLAGSTAFF
People kept pouring in, driven out of the heat of the desert to the high country cooler weather.  We came up on Thursday, late afternoon, and immediately felt happy to step out of the car.  After the show was laid out, we headed to Charleys for Burgers and Tiramisu with Marlys and Roger and Sue and Wil.

Friday was a lazy morning and then we headed for a wonderful lunch at Josephine's with Marlys and Roger, Diana and Mike and David and Julie.  Julie's prints were on the walls of the dining room we were in and David's prints were in the room next door.  It felt perfect.  And the fried green tomato sandwich was to die for.  After lunch we ended up back at David and Julie's where they graciously let us oooh and ahhh over all the prints on their walls as well as the work they have recently completed.  Julie's reduction woodcuts are inspirational and David's etchings are often weird but funny and poignant - but all masterful.  David and Julie are more of a draw for me than the cooler weather.  It is great to be able to talk about technical problems or new materials with such experienced printmakers.   (And they have a great dog named June!)

It's been a great little escape but now we must head back south.  Time to hit the studio for more art making!
Posted by Wendy Willis at 9:29 AM No comments:


Looking for a little relief from the Phoenix heat?

Head North this weekend for First Friday Art Walk in downtown Flagstaff...where you can also view "A Little Relief" at Wil McNabb Fine Jewelry (#14 on the map). http://www.flagstaffartwalk.com/guide.htm

Curated by Marlys Kubicek and myself, it is “a collective show of reduction relief prints featuring artists from Arizona, California and Nevada:  Miles Becker, Kimberley Boege, Manuel R. Burruel, Alondra Contreras, Meghan Farley, Susan Hartenhoff, Diana Hartley, Marlys Kubicek, Rossitza Todorova and moi.  On view until October 4th. All prints are 6"x8" or 8"x6"…just the Little Relief you’ve been looking for.
Posted by Wendy Willis at 12:18 AM No comments: