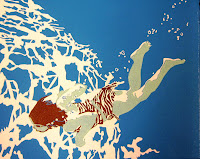 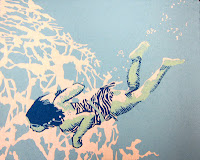 I hadn't realized it until I finally got back into the studio, I hadn't printed since JANUARY.  A whole half a year lost to family passages and selling our house, moving into a temporary apartment and moving out my studio and into storage.  It is almost all over.  For now though, I am back at the press.  I planned a two color reduction print. But when I started printing,  I had so much fun experimenting I ended up with a 3 to 5 color edition where each of the 13 prints is different from the next.  It is what is known as a variable edition.  It's 8" x 10" and is named "Diving Miss Daisy." 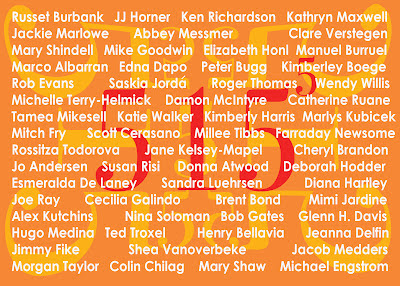 We artists of the 515 Arts Gallery have each invited 5 other local artists to exhibit a 12" x 12" piece during the month of August.  My invited artists are Kimberley Boege, Manuel Burruel, Kimberly Harris, Diana Hartley and Rossitza Todorova.  I have so much respect for these artists, their passion for their work, the fun and involvement they have in LIFE.  Many of us have created new work for this exhibition so stop by  to see 60 works by 60 different local artists.  First and/or Third Friday in August and all August Saturdays from 1 to 5:00 pm at 515 E. Roosevelt in downtown Phoenix. 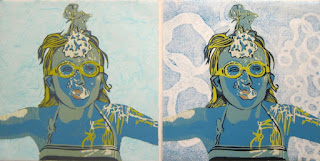 I had planned another 2 color reduction which ended up being a 5 color reduction/collage.  Also variable, a tad.
Posted by Wendy Willis at 12:32 AM 2 comments: