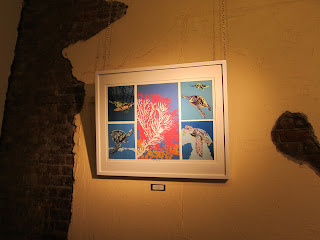 Too much time has passed since I last posted.  I seem to be better at Facebook posts than blogposts but will try to do better.   So for a quick catch up - I had a one person show at Wil McNabbb Studio in Flagstaff AZ the month of August 2016.  Work from my Dangers Ahead show was exhibited. 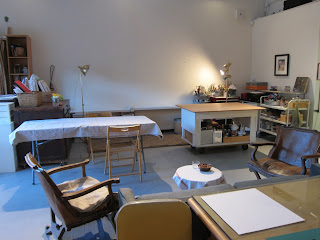 In early August 2016 I taught a weekend Reduction Relief workshop in Napa, CA at Nancy Willis's beautiful studio.  I will be repeating this workshop again this August 4-6th.  Let me know if you will be in Napa Valley and are interested in attending. 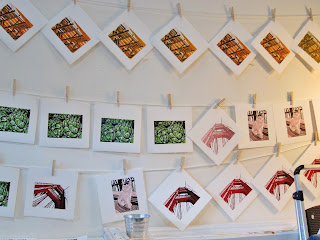 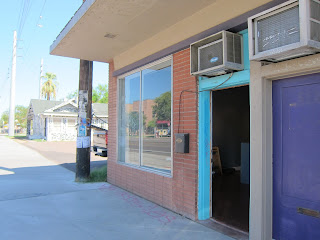 In September 2016, Five15 Arts Gallery closed its door after 15 years on Roosevelt Row.  A developer bought our building and evicted us.  He will be building a new building behind our old one, that we are interested in occupying, if all goes well.  Until then, we were homeless until the Phoenix Center for the Arts offered us a temporary home in their own relocated gallery space.  Our first show was in January 2017, a group show called "Changing Spaces". 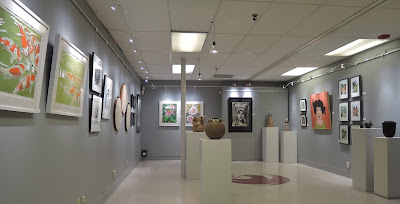 We juried in three new members who have added fun and creativity to our merry group.  We had another group show for Art Detour in March, the work I showed is in the photo below. 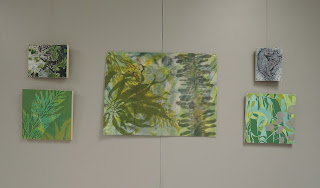 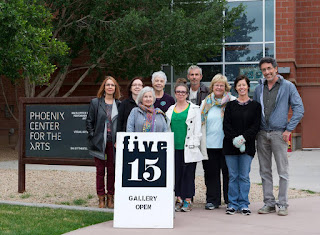 I continue to work within the theme of Dangers Ahead and created this piece about the soon to be extinct Vaquita for the Mesa Arts Center Calendar which is a fundraiser they hold every year. 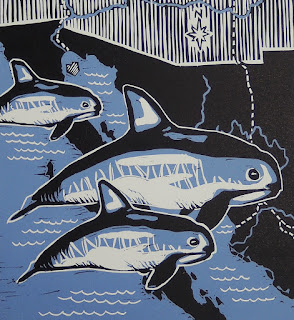 As a member of the Arizona Print Group, I was happy that the Seacourt Print Workshop in Bangor Ireland, exhibited our "Mythical Creatures" portfolio at their gallery in Northern Ireland.  My print is seen over the right shoulder of the man below. 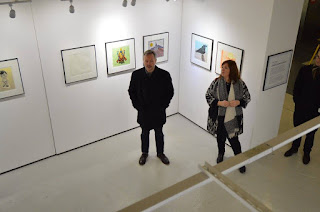 In January, I enrolled in the spring printmaking class at Glendale Community College taught by my friends and fellow printmakers, Donna Atwood and Marlys Kubicek.  One of the class assignments was a 2 color reduction linocut, to be printed at Santo Press in Scottsdale.  Such a luxury to have Brent Bond print for us.  We also just completed a two color screen print - self portrait - totally fun and great to learn a new process! 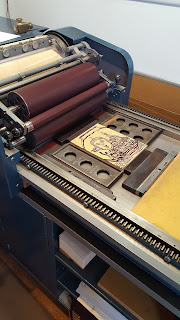 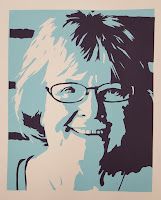 And gratefully, I have continued to teach printmaking classes at the Thunderbird Arts Center (the northern facility of the Phoenix Arts Center)  My classroom was moved two weeks ago to the room depicted here, and I am thrilled to have a space of my own.  Just for printmaking!  I have two classes scheduled for the next 3 Mondays (May8th) - relief at 3 pm and a drawing based solarplate class at 6 pm.  And two Saturday general solarplate classes beginning May 13th.  There are a lot more classes offered for the summer so check them out at phoenixcenterforthearts.org/printmaking/ 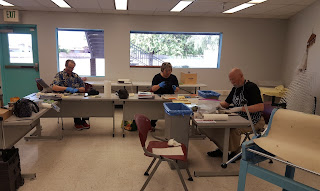 Coming up, I am working on a 3 color reduction relief print for a print exchange with the Seacourt (Irish) printmakers. Twenty of them and 20 Arizona Print Group members are creating work based on poems from their locality.   Five15 Arts is presenting the 6th Annual Five15 to the Power of 5 exhibition of 12 x 12 artwork from over 60 artists.  I need to make something new for that and then in September we will be doing a political based show, so I need to work on those projects.  I added many of my new prints to my website - wswillis.com so give them a gander and let me know what you think.  I welcome studio visits from interested buyers!